Yes (if the Tier 4 Speciality Building in BTD5 Mobile/Steam is active). Otherwise no, Viral Frost and Absolute Zero ability can freeze camo bloons, but they can't directly attack them).

Ice Tower is a tower that has been present in the BTD series since BTD1. Originally, it was merely a ball of ice surrounded by snow, and it was known simply as Ice Tower. It was then called Ice Ball in BTD2 and BTD3, but it went back to being called Ice Tower in Bloons TD 4, BTD5, and BTDB. In BTD5, the tower was redesigned as a monkey, and has been portrayed as such in all following sequels. In Bloons Monkey City, Bloons TD 6, and BATTD, it's known as Ice Monkey.

It attacks by freezing the bloons for roughly half a second at first. It has a short range when not upgraded, but is still effective at delaying bloons. Without any upgrades or Specialty Buildings, it is completely ineffective against White Bloons, Zebra Bloons, and MOAB-Class Bloons.

Frozen bloons cannot be popped by sharp objects, and must be blasted or "vaporized" using a tower such as, but not limited to, the Bomb Tower, Super Monkey with Laser Vision, Wizard Monkey's Dragon's Breath, or sunrays shot by a Sun God. Whirlwinds and tornadoes can immediately thaw frozen bloons, though they will still be blown back. MOAB-Class bloons cannot be frozen by the Ice Tower (exceptions in Bloons TD 6) but can be damaged with the Snap Freeze upgrade.

The Ice Tower is a very useful tower because of its abilities once it has been upgraded to the Arctic Wind. In the higher rounds, it is recommended in several guides to have at least one Arctic Wind, as it can slow many bloons down to a crawl. Arctic Wind also has an extra ability in BTD6 that allows you to place both land and water towers in the water affected by Arctic Wind.

As of Bloons TD 6, the Ice Monkey can now pop bloons without being upgraded, like the Snap Freeze did in previous games. However, it is more expensive in compensation, and its pierce was heavily nerfed. It now costs $425 on Easy, $500 on Medium, and $540 on Hard, and $600 on Impoppable.

Ice Monkey makes up to 15 appearances:

The Ice Monkey makes an appearance in the puzzle game Bloons Pop!. It produces six-pointed shards of frost every time it attacks, freezing any bloon other than White or Zebra for up to 3 turns.

In Version 1.5.0, Ice Monkey has been added to Bloons Adventure Time TD as a Common Ally. He can be equipped to Max, Sam, Captain Cassie, C4 Charlie, Supermonkey, Sai, Juggernaut Max, Commander Cassie, and Ice King. He costs $300 on all difficulties, has an attack speed of 0.42, range of 25, pierce of 8, and initially 0 damage, and a damage type of freezing (actually "N/A" according to the in-game statistics) like the BTD5 Ice Tower.

He comes in groups of 2 per ally slot, allowing up to 16 Ice Monkeys to be placed on the map at one time (+2 with Commander Cassie's "Scramble!" upgrade, and double the total sum with Warrior Bubblegum's "Born to Rule" upgrade).

The Ice Tower has more differences between its Flash and Mobile counterparts compared to other towers.

Ice Tower has mixed popularity. While it is often not used due to hindering towers that can't pop frozen bloons, whenever it is used the Ice Tower is most often used for its Absolute Zero upgrade, which in this game can slow down M.O.A.B. Class Bloons to half speed, similar to Sabotage Supply Lines but at a lower cost. However, the other upgrades are almost never as frequently used, therefore many of the upgrades other than Absolute Zero have been buffed through various updates. Some fairly popular load outs that use the Ice Tower are Dart Farm Ice, Apprentice Farm Ice, Ninja Village/Mortar/Farm Ice, Dartling Farm Ice, and Heli Farm Ice.

Strangely enough, the Ice Tower has received very few buffs or nerfs. While it technically has received more buffs than nerfs, the Absolute Zero nerf is more prevalent compared to its buffs received.

The Ice Tower and all of its upgrades (left to right) in BTD4. 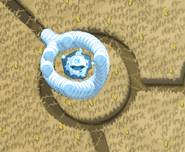 An Ice Tower in BTD5 Flash with freeze particles

Ice Monkey as an Common Item in BATTD, ready to be collected