Ice Shards is the 3rd upgrade on Path 1 for the Ice Monkey in Bloons TD 6. It causes bloons frozen by this tower to release 3 shards when popped. This includes Camo Bloons, as its previous upgrade Cold Snap gives camo detection and lead popping power to the Ice Monkey. More technically speaking, bloons affected by this Ice Monkey's blasts will set a shardable status effect for an amount of time equivalent to the duration of the freeze status effect of that tower. Ice Shards also increases range by +5, from 20 to 25.

Compared to BTD5, Ice Shards can only be released if the Frozen Bloons are popped by another tower other than itself, since its ice blasts are incapable of damaging Frozen Bloons on its own without Re-Freeze and attacks at a slower rate than the freeze duration. Along with that is Ice Monkey's general nerf of decreased pierce, both to the ice blast attack (down from infinite pierce to 40 pierce) and the shattering ice shards (3 pierce per shard, and only clusters of three at 120° apart).

The ice shards from Ice Shards can damage MOAB-class bloons, whites and zebras, and frozen bloons. However, they cannot damage lead bloons, or DDTs outside of being nearby a Monkey Intelligence Bureau.

This upgrade replaces the hexagonal decoration with three rhombi in a three-lobed leaf arrangement. The middle one is larger than the other two. The Ice Monkey's fists are also larger.

When attacking, the Ice Shards Monkey now clenches his fists, and raises himself upwards and downwards with force focusing on his fists.

During idle animation, the Ice Shards Monkey uses new idle animations. Sometimes, it occasionally looks at his fists. It sometimes may quickly shake its fists.

Ice Shards produces freezing blasts in a zone-like style. Technically, the Ice Monkey is locked on the Close targeting priority. However, for simplicity reasons, this monkey has no targeting priorities.

Ice Shards is mostly relegated to races, but can still be decent on hyperdense rounds during mid-game rounds. Combining Ice Shards with Bloontonium Reactor makes a great combo to maximize shard production, as Reactor has a fast but reliable area-of-effect attack when submerged.

In BTD6, strategies that worked in BTD5 are no longer possible. However, 3-0-2 Ice Shards can be stacked together and form a similar mass-shredding of bloons.

Ice Shards is weaker than it did in BTD5, as it now requires other towers to activate the shards of ice. As for balance changes throughout BTD6 history, Ice Shards now provides extra range too. 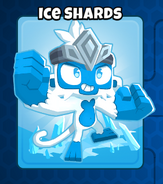 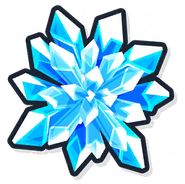