Ice Shards is the 3rd upgrade on Path 2 for the Ice Tower. The upgrade adds a small attack speed buff to the Ice Tower, and Bloons that are frozen by this tower have sharp ice shards embedded in the bloon layer, so that when a bloon is popped or thawed, five shards from the bloon fly out in a specific formation, popping additional bloons, including frozen ones (except in BTDB Flash due to a nerf). A bloon being popped by snap freeze counts, so ice shards come out upon freezing.

Ice Shards can damage MOAB class bloons, whites and zebras, and frozen bloons. However they cannot damage lead bloons, D.D.T.s or the Dreadbloon outside of being nearby a Monkey Intelligence Bureau.

This tower is something of a high risk, high reward option. On one hand, the tower's abiltiy lets it destroy tons of bloons in an instant, even destroying most M.O.A.B.s if they're close enough to the shards.

In BTD5, it is possible to horde masses of bloons with one 1/3 Ice Shards and then unleash the masses of shards with one upgrade to the Snap Freeze upgrade. Either that or a 2/3 Ice Shards can immediately shred down massive bloon rushes.

Due to its massive potential for extreme popping power, its price was increased as a result. 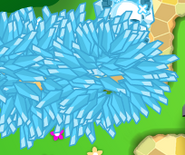 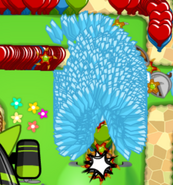 A work of art.

Ice Shards in Mobile, about to freeze bloons (specifically the Blue Bloon below)

Retrieved from "https://bloons.fandom.com/wiki/Ice_Shards_(BTD5)?oldid=269216"
Community content is available under CC-BY-SA unless otherwise noted.