Income earning per round (12.0 and later)Edit

Note: The table assumes that the Monkey Bank has been initially upgraded before the round starts and that the income is given as when after the round.

Income earning per round (pre-11.0)Edit

The following is information regarding income earning per round for the IMF Loan before it received a buff when combined with Benjamin. On Version 7.0 and later, there was a Monkey Bank nerf that did not affect IMF Loans or Monkey-Nomics.

Note 2: In BTD6 v3.x, the Monkey Bank (implied for the IMF Loan; originally tested by Monkey Bank) does not appear to consistently calculate interest correctly for the 0/3/x and 1/3/0 banks. The following results are the maximum of three tests

Bug: If the IMF Loan's debt has been paid off, the Banana Farm that triggered it cannot use its ability until the next round starts. The same applies to Monkey-Nomics.

Bug fix; the ability no longer requires the next round to start upon paying off the IMF Loan (again, also applies to Monkey-Nomics.) 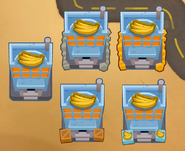