IFR paints the entire Heli dark grey save for the still-yellow tail, whilst adding dark grey wings with yellow tips. The pilot's cap is now blue, and their goggles, which they wear over their eyes, are tinted green.

All changes to the Heli are retained on crosspath, but past Tier 2 the pilot's outfit is not retained.

IFR adds internal camo detection for the Heli Pilot, allowing it to automatically detect Camo Bloons. It is quite an expensive upgrade, so it is usually wise to hold off purchasing this upgrade until harder camo bloon rounds or if pursuing the Downdraft upgrade.

IFR was not changed since it was first released in BTD6. The only changes for IFR are based upon previous upgrade Bigger Jets, which are shown here.

BTD6 artwork. Above it, "IFR" is the upgrade name 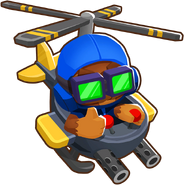 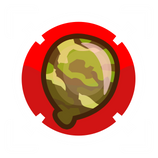