Each missile by default creates 3 explosions on impact (4 explosions with Powerful Darts), similarly to Captain Churchill, with a very brief delay in between each explosion. Unlike any other explosive-based tower, the total number of explosions per missile can be increased with pierce buffs such as Berserker Brew, although every number of explosions consumes an amount of pierce for the missile projectile, rounded up. For instance, Berserker Brew's +2 pierce buff only adds +1 explosion, while Stronger Stimulant's and Permanent Brew's +3 pierce buff adds +2 explosions. The missile itself has 6 pierce (+2 with Powerful Darts), and each created explosion requires and uses 2 pierce.

If crosspaths with Laser Shock, projectiles laser status effect only applies to the initial hit and not its explosions.

The monkey's helmet is now purple with an attached black gas mask with the same green glow. The straps that attach to the gas mask are also colored purple.

The rockets it fires are black with a dark grey base, and light green fins and tip.

Crosspathing with path 1 adds a red circle and gold lining, then adds small wing-like extensions to the green emblem. The rockets, with Laser Shock, leave behind the red trail.

Crosspathing with path 3 adds the tripod, then paints it blue while adding two Bloontonium green stripes to the helmet.

Hydra Rocket Pods drastically alters the projectiles fired, converting them into rockets that explode multiple times as they pass Bloons. The explosions themselves, of which there are 3 of them at base, deal 1 damage, have 6 pierce, and 8 blast radius.

Any pierce buffs received can increase the number of explosions; specifically, each additional explosion requires and consumes +2 pierce; for instance, Berserker Brew grants +2 explosion pierce and +1 explosion count, as does crosspathing with Powerful Darts.

Crosspathing with Laser Shock causes only the main missile impact, not the explosions, to be able to apply and make use of Laser Shock's unique effects.

Hydra Rocket Pods customly aims based on direction and angle of where the Dartling points towards. It shoots straight movement projectiles controlled in a aim-based mobile style guided by touch-based mobility, albeit with some erratic angular deviation.

Hydra Rocket Pods excels at destroying grouped bloons by its ability to create multiple explosions per missile. Because of how the new explosions work, it acts similarly to Captain Churchill by producing up to 3 explosions on impact (or 4 with Powerful Darts), making it effective at handling multiple groups of bloons along straight lines. Hydra Rocket Pods greatly benefits from pierce buffs, increasing the number of explosions while allowing the explosions to hit even more bloons. 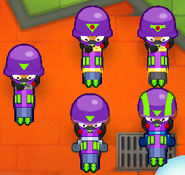 Homeland Defense doubling explosion count from 3 to 6 per missile

One stray Hydra Rocket Pods rocket exploding on a obstacle 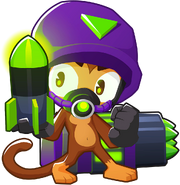 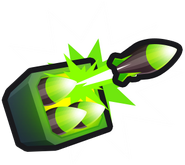 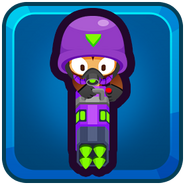