Not to be confused with Hot Shot, a Monkey Buccaneer upgrade.

Hot Shots is the Tier 3 upgrade of Path 1 for the Tack Shooter in Bloons TD 6. Along with allowing the Tack Shooter to pop Frozen and Lead Bloons, each tack now pops two layers instead of one. Due to the fact that it deals physical damage, it can still pop Purple Bloons, unlike its succeeding upgrades, Ring of Fire and Inferno Ring.

This upgrade changes all pink elements of the Tack Shooter to gold-yellow. Its silver-colored barrels are replaced with black ported barrels, and its black dart pattern on top is replaced with an orange flame pattern. Its base is now a single cylinder ring instead of two distinct cylinders. Both the base ring and top ring have dimples around it.

Path 2 crosspathing adds gear-like protrusions to the top of the tower and claw-like extensions to the base, whilst also raising the entire tower.

The following is a list of statistics of a Tack Shooter with Hot Shots. It includes its base statistics and all associated crosspathing interactions. Expand the box on the right to see further information.

The following are a list of wiki-written damage types associated by a Tack Shooter with Hot Shots. These damage type statistics include how it attacks and how these attacks would affect bloons. Expand the box on the right to see further information.

Hot Shots is a low-cost method of providing high damage within short range. Compared to other upgrades, Hot Shots can pop any bloon type, and it deals extra damage to all bloon types. While not the most cost-effective method, spamming 3-0-2 Hot Shots with Primary Mentoring and Gwendolin is a decent option for inflicting high damage for the early mid-game until the early late-game, while saving enough money for more powerful upgrades. 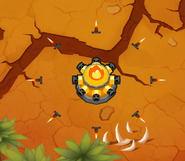 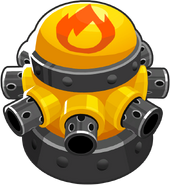 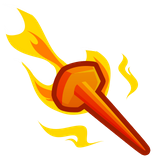