Not to be confused with Hot Shots, an upgrade for the Tack Shooter.

Hot Shot is the Tier 2 upgrade of Path 2 for the Monkey Buccaneer in Bloons TD 6. It allows the Buccaneer to shoot flaming grapes that can pop Frozen and Lead Bloons, but not Purples. The grapes also cause a damage-over-time effect similar to the Mortar Monkey's Burny Stuff upgrade; this does 1 damage per 1.5 seconds for 3 seconds.

After buying this upgrade, the grapes shot will be on fire. Crosspaths do not affect the appearance of the grapes, though Destroyer and Aircraft Carrier will have their purple trims recolored to orange.

will be added soon quickly

Hot Shot can be a useful upgrade to Grape Shot for popping Lead Bloons early on, and the extra damage is also helpful. A 0-2-2 Buccaneer is also useful for popping Camo Lead. As for 2-2-0, it has similar benefits to 2-1-0 except can handle rounds with Leads and deal slightly more damage overall.

Received a crosspathing interaction as a buff, taken from its previous upgrade. 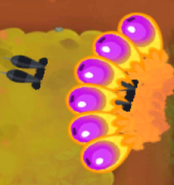 Hot Shot igniting but not popping Purple Bloons. Dart is hitting Purples, however. 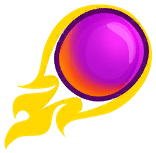