High Energy Beacon was released on Mar 22, 2012, being the current final upgrade for the path 1 upgrades for Monkey Village, replacing Energy Beacon. It costs $10,200 on Easy, $12,000 on Medium, $12,960 on Hard and $14400 on Impoppable. All towers within its range with Special Abilities have their cooldowns reduced by 20% (50% on BTD5 iOS) and the village itself gets a powerful energy beam attack. This beam doesn't stop and the locked Bloon loses all its layers very quickly. This upgrade also increases the range of the Monkey Village. 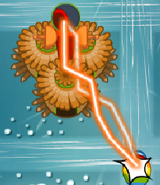 High Energy Beacon attacking a BFB in BTD5 Flash
Add a photo to this gallery
Retrieved from "https://bloons.fandom.com/wiki/High_Energy_Beacon?oldid=267233"
Community content is available under CC-BY-SA unless otherwise noted.