Heli Pilot is a Military-class tower in Bloons TD 6. The tower retains its name and role from the Bloons TD 5 Generation, with significant additions. It did not receive any teasers prior to release, but it was first shown when the game was available to select YouTubers several days before BTD6's official release date.

The Heli Pilot is an aerial tower that shoots darts every few seconds. Due to its expensive cost, the tower however is eminent in both damage efficiency and support capability. It is one of the two towers that can be controlled via the player's mouse/touch, with the other being Dartling Gunner. It is also known as the tower with most special abilities in a single upgrade.

The Heli Pilot returns in Bloons TD 6, filling in its same role as a mobile tower. It still has its original targeting options, with Pursuit still being unlocked via upgrade.

Path 1 focuses around DPS and offense starting with Razor Rotors able to pop bloons (Including Lead or Frozen) on contact. Apache Dartship extending its arsenal to homing missiles and powerful machine gun with final upgrade Apache Prime increasing the strength of all its weapons massively.

Path 2 focuses on support. Starting with Bigger Jets that allows it to move faster, then IFR, which gives it camo detection, as well as the first two upgrades improve MOAB Shove followed by Downdraft, which pushes back any non-MOAB bloons on contact. Support Chinook gives the tower two abilities, being a crate ability, which gives either bonus lives or bonus cashes followed by the final upgrade Special Poperations allowing the tower to deploy a powerful Marine temporarily.

Path 3 focuses on defense. The first two upgrades started increasing attack speed, then MOAB Shove to reverse or slow their movement. Comanche Defense summons three Mini-Comanches once bloons reach a certain percentage of the bloon track, followed by the final upgrade Comanche Commander, which increases its weapon as well as the Mini-Comanches are now permanent.

The following are a list of target priorities that a Heli Pilot can use:

The Heli Pilot's main attacks always default on First based on the range of the helicopter's weaponry. Alternate attacks tend to have different target priorities:

This section displays Monkey Knowledge that has effects on Heli Pilot and its changes when compared to one by default:

Listed are comparisons of the Heli Pilot in BTD6 compared to BTD5. Takes into account Mobile versions.

Note: Lists all balance changes implemented for the Heli Pilot when it was first released in Bloons TD 6 (June 14th 2018) in comparison to Bloons TD 5. Takes into account Mobile versions of Bloons TD 5.

Bug fixes and other changes[]

When placing a Heli Pilot: 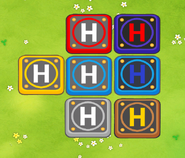 The base Heli Pilot pad, alongside all Tier 4 and Tier 5 pads.