The Heli Pilot returns in Bloons Tower Defense 6, filling in its same role as a mobile tower. It still has its original targetting options, with Pursuit still being unlocked via upgrade.

The Heli Pilot is a Military-category tower.

Pursuit now automatically switches the tower to the Pursuit targeting mode upon purchase. (Technically a buff, but sometimes the automatic Pursuit Mode interferes with players)

It is now no longer possible to stack towers on top of other towers with Support Chinook. 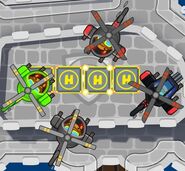 Instructions mobile
Add a photo to this gallery