Heavy Shells is the third upgrade of Path 2 for the Mortar Monkey in Bloons TD 6. It allows the mortar to pop Black Bloon properties as well as deal +1 damage to all Fortified, +1 damage to all Leads (including visible DDTs), +3 damage to Ceramic Bloons, +1 damage to MOAB-class, and +2 damage to stunned bloons.

With the Heavy Shells upgrade, it changes the appearance of both the monkey and the mortar cannon. The monkey is now an officer in a green military-style shirt and green beret, paired with a black-barreled mortar cannon with two yellow stripes around it. The monkey stands by its barrel to continually press buttons on its handheld remote, instead of pushing a ground-level lever. In the official artwork, the monkey points with its left index finger.

Heavy Shells is quite expensive for a single tower with moderately slow attack speed and low accuracy, but it becomes a good low-cost option at countering early Ceramics, as well as good support at destroying groups of Black Bloon layers in earlier rounds. In addition, it has a unique synergy with stun attacks by dealing more damage to bloons inflicted by a stun status effect. Similar to most Mortar Monkeys, targeting Heavy Shells along bends will optimize the accuracy of its explosive attacks.

Heavy Shells is usually a stepping stone to Artillery Battery in most cases, but it does a good job as a stepping stone compared to other upgrade alternatives, due to being able to damage any non-camo bloon type, having global range potential, and possessing decent pierce.

Additional specialization is given to Heavy Shells to reduce the Mortar Monkey's general blimp weaknesses and increase synergy possibilities, and these buffs have passed on to subsequent upgrades at different extents. 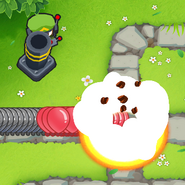 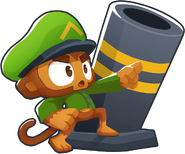 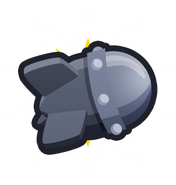