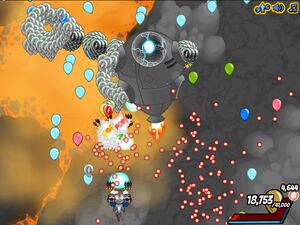 The Heavy Metal Bloon (also known as Robotic Lead Monstrosity or Underground Boss) is the final boss of Bloons Super Monkey 2 that appears in Mount Magma. It is a giant rocket-propelled metal blimp shaped like a Lead Bloon. Not only is this boss extremely difficult to pop/destroy, but it also defends itself by creating weapons and barriers out of Shielded and Phasing Bloons.