Heavy Bombs is the second upgrade of Path 1 for the Bomb Shooter in Bloons TD 6. It allows the Bomb Shooter to deal 2 damage per explosion or +1 damage for any crosspath upgrade. On top of this, all explosions gain +10 pierce, for up to 30 bloons per shot instead of 20 from Bigger Bombs.

This upgrade is almost identical to the previous upgrade, Bigger Bombs; the only differences are grey wheels instead of brown (possibly made of stone or metal instead of wood) and a second red reinforce band on the back.

Heavy Bombs grants +1 damage and +10 explosion pierce, for 2 and 30 respectively.

Heavy Bombs increases damage for the Bomb Shooter, and increases the maximum number of bloons each explosion can affect. Combined with the practically double damage for most Bomb Shooter upgrades (except MOAB Maulers and their later upgrades, and Bomb Blitz), the extra pierce allows for better combat versus hyperdense rounds. This upgrade has greatest effect for Cluster Bombs, as all its explosions including secondary explosions gain a significant boost to damage and pierce.

An interesting side effect with this upgrade allows a Bomb Shooter to be significantly better against Rainbow Bloons, as it allows its explosion to release Whites and Blacks from the Rainbow Bloon, opening up potential damage to the White Bloons where a normal Bomb Shooter would be stuck with the Zebra layer's explosive resistance.

Heavy Bombs was buffed to make crosspathing a Bomb Shooter with this particular upgrade more useful for Middle Path.

Heavy Bombs shooting a bomb at a Test Bloon 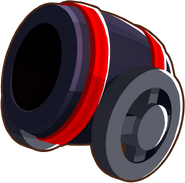 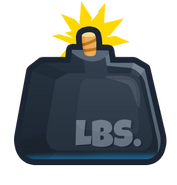