Secondary attacks such as Lightning from Heart of Thunder are also affected by this, making the casting of them faster.

Heart of Vengeance allows the Druid to become more effective in combination with life loss. For the best results, try juggling between losing as many lives as possible in the early-game and avoiding losing the game. In addition, avoid any life-regeneration upgrades in the defense, as this will harm Heart of Vengeance's special life-loss benefits.

An interesting strategy on game modes other than Impoppable or CHIMPS is to spam as many 0-0-2 Druids as possible and lose as many lives as possible without losing the game, allowing as many Druids as possible to benefit from this upgrade. Similarly, slowly using Ezili's Sacrificial Totem every so often to drain away lives manually can be done to create a similar effect. On Impoppable and CHIMPS, this is simply a +10% attack speed boost, which while small is significant for already powerful Druid upgrades.

A slight buff to this upgrade to make it not useless on game modes where losing lives is not an option. 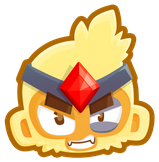