Heart of Thunder is the 2nd upgrade of the 1st path in Bloons TD 6. It allows the Druid shoot lightning bolts similar to a 2-x Monkey Apprentice in BTD5 albeit with a much lower pop limit and attack speed. It is shot every 2.3 seconds and dealing 1 layer of damage and having 31 pierce. It also does follow along the path and when paths intersect and near each other, such as on Cubism, it will jump from path to path randomly zapping bloons. The bolt cannot pop Purple Bloons, although the thorns will.

Heart of Thunder artwork as shown in the upgrades menu 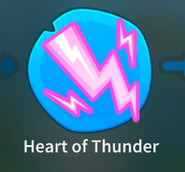 Retrieved from "https://bloons.fandom.com/wiki/Heart_of_Thunder?oldid=234518"
Community content is available under CC-BY-SA unless otherwise noted.