Heart of Oak is the second upgrade in the middle path for the Druid in BTD6. Heart of Oak allows all Druid attacks to strip damaged Regrowth Bloons of their regrow property.

Heart of Oak no longer removes Regrow from bloons not damaged 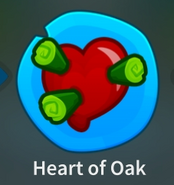 Retrieved from "https://bloons.fandom.com/wiki/Heart_of_Oak?oldid=270186"
Community content is available under CC-BY-SA unless otherwise noted.