If purchased, Wall of Fire will obey set Target Priority.

Crosspath required (can be upgraded to 1/0/2)

Guided Magic is the first upgrade of Path 1 for the Wizard Monkey in Bloons TD 6. It allows the Wizard Monkey magic bolts to home in on bloons and bypass Line of Sight restrictions. It also increases overall projectile lifespan to account for the seeking. Certain alternate attacks are also affected by this crosspath, but interact with this crosspath in very different ways.

Guided Magic can affect crosspaths that grant other magical spells. Of the ones that grant ignorance of Line of Sight, Fireballs and Wall of Fire blazes with this crosspath can pass through walls, and Dragon's Breath flames can too. As for lifespan, Dragon's Breath flames last 100% longer and Undead Bloons from Necromancer: Unpopped Army and Prince of Darkness last substantially longer. Wall of Fire blazes with Guided Magic also dynamically adjust position according to target priority if bloons are within range.

The Wizard's hat changes from black to blue, excluding the designs on its hat. In its artwork, its magic bolt is blue, but in-game, the colour of its projectile remains purple.

Guided Magic improves accuracy of many attacks in various different ways. Being able to let the bolts and lower-tier fire attacks ignore Line of Sight helps with the Wizard on maps with many obstacles. Plus, the seeking for its bolt makes it viable at catching quicker bloons and cleaning up any stray bloons. As for the Dragon's Breath attack, which adds just extra lifespan, it does help flames reach further, but generally doesn't do much assistance overall.

Crosspathing benefits have been given to Guided Magic to make the Wizard Monkey more usable on maps with Line of Sight issues and to reduce RNG of Walls of Fire.

Guided Magic in the upgrades menu 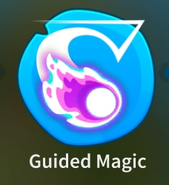 1-0-0 Guided Magic seeking onto another bloon

1-0-1 Guided Magic seeking onto another bloon 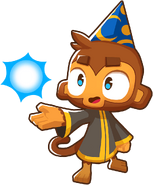 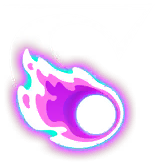