Bloons Wiki
Register
Don't have an account?
Sign In
Advertisement
in: Articles in construction with a WIP, Monkey Ace, Special Abilities,
and 8 more

Ground Zero, is the 4th upgrade on Path 2 for the Monkey Ace in Bloons TD 6. It adds a new ability that drops a nuke, which deals 700 damage onto up to 1,000 bloons nearest the center of the Ace's runway upon detonation. Compared to its BTD5 counterpart, it deals twice the damage but requires a 0.8s deployment cooldown and no longer has infinite pierce, albeit arbitrarily high pierce. The nuclear explosion affects the whole screen, starting with the bloons closest to the Ace's runway, and can penetrate blimp layers. The ability has a cooldown of 45 seconds.

In addition to an added ability, the Ground Zero plane now drops improved Bomber Ace bomb arrays that deal 10 damage per bomb instead of 3, and bombs pop 40 bloons instead of 20 (52 instead of 32 with 0-4-1). The bomb arrays still cannot pop Black Bloon properties, but the ability bomb does.

Ground Zero is a green military-style monoplane. Shown in the upgrade artwork is the plane dropping a green-and-black nuclear bomb. Unlike in BTD5, which appeared as black-colored B-2 Spirit Bomber, the Ground Zero plane resembles a A-26 Invader instead, to appear in line with the airborne explosives upgrade theme.

The landing base will have green borders upon purchasing the upgrade.

The Ground Zero upgrade also comes with an ability that deals 700 damage to up to 1,000 bloons on screen, prioritizing the bloons closest to the explosion radius. One use of this ability is enough to eliminate non-fortified MOABs and non-fortified DDTs before Round 101. Just like in BTD5, Super Monkey Storm can be used instead, but it costs much more Monkey Money to purchase Super Monkey Storms than in BTD5, and Ground Zero can penetrate through MOAB-class bloons. Note that there is an initial cooldown of 15 seconds before initial activation.

Each Ground Zero will have a cooldown of 45 seconds upon activation, along with approximately 0.8s seconds before the special Ground Zero bomb explodes on impact.

Dart volleys are zone-type sprays of projectiles shot relative to the position of the aircraft. Bomb salvos are considered on-track attacks by a spawn. Ability nuke affects the whole screen and is locked on Close relative to the landing base for pierce calculations.

The Ground Zero upgrade is substantially stronger in BTD6 compared to in BTD5, not only packing with a powerful nuke ability but also much stronger bombs. These arrays of bombs deal a massive 10 damage each, significantly stronger than its dart attacks. When micromanaged carefully by ensuring the bombs explode when the bloons do not turn into Blacks or Zebras, Ground Zero is formidably powerful on its own, and even comes with an emergency ability that is able to deal 700 damage to an extremely high number of bloons on screen, enough to wipe out virtually all bloons, MOABs, and DDTs on screen. Because of its powerful versatility, a single 1-4-0 Ground Zero has been used to successfully complete multiple 2TC challenges and LCC (Lowest Cost CHIMPS) challenges.

Ground Zero has overall been buffed since it was first released, mostly for its bomb attacks and ability damage. The ability keeps the original BTD5 Ground Zero damage (700 instead of the nerfed 350), though in later updates it now only has limited but still substantially high pierce. Since it gained dominance as a mid-game advancer, it received a price nerf to account for its incredibly versatile damage potential and give more value to Tsar Bomba.

Another instance of dropping the nuke 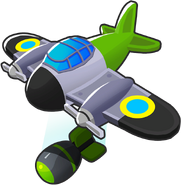 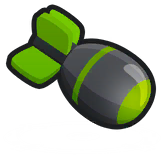 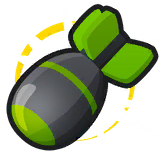