Bloons Wiki
Register
Don't have an account?
Sign In
Advertisement
in: Articles in construction with a WIP, Monkey Buccaneer, Bloons TD 6,
and 4 more

Grape Shot is the 1st upgrade of Path 2 for the Monkey Buccaneer in Bloons TD 6. It allows the Buccaneer to attack with 5 grapes per shot (or 6 with Big Bunch MK) that pops one bloon per grape (two with the MK "Naval Upgrades"). Grapes have a spread fixed at 100° at maximum.

Grape Shot adds a stack of grapes to its ship. When Destroyer or Aircraft Carrier are crosspathed with Grape Shot, the flag and the edges of the naval ship turn purple. When crosspathed with Merchantmen or Favored Trades, the monkey will store grapes underneath some cover.

Naval Upgrades MK). Crosspathing with Long Range adds +1 pierce to every grape. Also, since Crow's Nest has moved to Path 3, Hot Shot is the new upgrade after Grape Shot, a cheaper alternative to Lead-popping power from the Buccaneer. In addition, Grape Shot will also shoot from behind if the Buccaneer detects the presence of bloons from behind, allowing twice as many grapes to be shot out at once.

Grape Shot provides the greatest early-game value for the Monkey Buccaneer, giving it the burst damage to deal with faster bloons and chip out more damage to MOAB-class. When given external buffs, Grape Shot becomes a powerful option at taking out large groups of bloons in the early-to-mid-game. 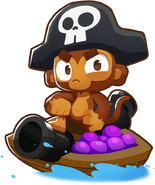 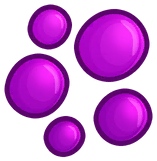