Grape Shot is an upgrade for the Monkey Buccaneer in BTD4, BTD5, and BTD6. Throughout all games, it adds a volley of deadly sharpened grapes to the attack. The popping power and number of grapes launched different across the various games it has appeared in; in BTD5, grapes pop 2 bloons per grape, while in BTD6, grapes pop 1 bloon per grape, though in both games they were more expensive than in BTD4.

This will add an independent volley of grapes alongside its main dart attacks. These grapes will pop 1 bloon per attack.

The boat of the Monkey Buccaneer will become elongated with three cannons on both ends of the boat. The grapes shot from the Buccaneer are green with eyes on them, appearing more like olives than grapes.

Grape Shot allows the Monkey Buccaneer to shoot a volley of four grapes alongside its main dart attack. These grape shots are independent attacks that shoot sequentially after each dart attack.

Initially, when upgraded to just Grape Shot, the Monkey Buccaneer will be carrying grapes on its ship. When upgraded to Faster Shooting, it will have both the pirate flag and the grapes. Upgrading to any Tier-2 upgrade will lose the grape storage visuals, though this will not lose the Grape Shot upgrade function.

Grape Shot is a powerful upgrade for the early-game, particularly against Grouped Reds. Placing multiple 0/1 Buccaneers are very effective against Grouped Bloons up to Round 10. Placing a single 1/1 Buccaneer can solo against Spaced Pinks if placed effectively, while placing multiple 1/1 Buccaneers are effective against early spaced rushes. However, the Version 4.3 buff to the base cost of the Buccaneer made Grape Shot a little too easy to afford, so it was nerfed to the "normal" price of $1000 for a 0/1 Buccaneer ($450 for base tower and $550 for Grape Shot). 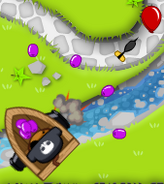 Grape Shot (upon unlocking it) in Bloons TD 5. 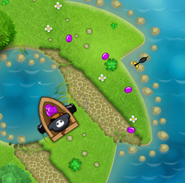 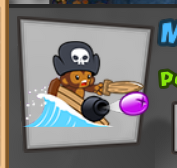