Grandmaster Ninja is the Tier 5 upgrade of Path 1 for the Ninja Monkey in Bloons TD 6. It is a much more powerful version of Bloonjitsu that shoots much faster (specifically one shot every 0.217s), gains +10 range, deals greater damage (2 per shuriken instead of 1, but not for Caltrops), and throws 8 shurikens per shot (9 with the Deadly Tranquility MK) instead of 5.

Grandmaster Ninja is a powerful Ninja Monkey upgrade that is highly dependent on numerous external buffs in order to maximize its efficiency. To maximize its power, buffs from up to 20 Shinobi Tactics, continuous Overclock, and a nearby Stronger Stimulant are necessary, along with a hero such as Level 11+ Obyn or Level 3+ Pat Fusty. With Seeking Shuriken, a highly buffed Grandmaster Ninja excels at hitting large numbers of bloons rather quickly and accurately.

Grandmaster Ninja gained a pierce buff in Version 9.0 due to its former inefficiency compared to multiple Bloonjitsus, ignoring physical space. However, Version 11.0 buffed Shinobi Tactics to also provide nearby Ninjas with bonus pierce, which further boosted Grandmaster Ninja. In Version 13.0, Grandmaster Ninja was reworked to synergize less when combined with stat bonuses such as Alch buff, Shinobi spam, and Pat Fusty's Rallying Roar. It still remains a viable option on CHIMPS strategy when paired with Shinobi spam and Pat Fusty's Rallying Roar. 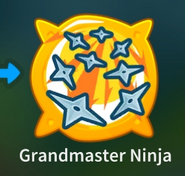 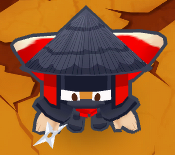 2 Grandmaster Ninjas, 2 Spirits of the Forest, and two Princes of Darkness 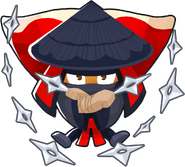 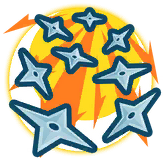