+8% attack speed and pierce, affects nearby Ninjas (shinobi boost, stackable up to 20 times)
During the ability duration, all Shinobi on screen range +8% and +1 moab-class bloon damage

Grand Saboteur is the final upgrade of Path 2 for the Ninja Monkey in Bloons TD 6. It improves its own Bloon Sabotage ability into the Grand Saboteur ability, which slows down all MOAB-class bloons for 30 seconds instead of 15 seconds, and additionally causes all incoming MOAB-Class Bloons to spawn with only 75% of their original health before entering the track, along with the usual 50% slowdown to all bloons on screen. Both the duration for percentage damage to incoming MOAB-class Bloons and the extended Bloon Sabotage slowdown lasts for 30 seconds instead of 15 while maintaining a cooldown of 60 seconds. Additionally, ability grants all Shinobis on screen +5 range and +1 damage to MOAB-class bloons.

Grand Saboteur can access Camo Prioritization, allowing all its attacks to prioritize Camo Bloons over other types when this secondary targeting option is active.

Grand Saboteur further improves the Bloon Sabotage ability to last twice as long and inflict instant 25% damage to all incoming blimps on screen. Although considerably more expensive than multiple Bloon Sabotage abilities, the instant percentage damage and increased duration can come in handy in specific scenarios. Outside of certain challenges, it is mostly used in super high late-game runs to deal massive damage to incoming BADs. However, Grand Saboteur's Shinobi buff via its ability can be used to empower Shinobi armies.

Until Version 31.0, Grand Saboteur received several quality-of-life fixes to make Grand Saboteur work more like it is intended to be. Version 31.0 gave Grand Saboteur its first real balance change by letting its ability buff Shinobis, which buffs it in normal gameplay but can be seen as a nerf only in Gravelord Lych boss battles. 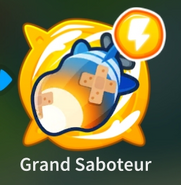 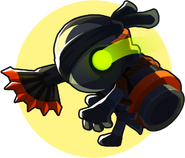 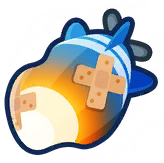