For the Rubber to Gold status effect, see Gold.

Golden Bloons will alternate, mutually exclusively, with Monkey Teams. These events will alternate every 2 days, every two 8:00pm NZST days to be specific. Monkey Teams may also appear on Co-Op Mode, including public Co-Op matches.

In early May of 2022, Golden Bloon events were postponed until August 3 due to a bug that made players lose lives if they escape.

The Golden Bloon always spawns at the start of a round, initially moving at a relatively slow speed. Each time it takes damage, it quickly moves to a different location on the map.

The Golden Bloon has many unique properties. Some properties are apparent, while others take some additional testing to find.

The HP for the Golden Bloon has a formula of:

until it gets fortified, where it becomes

. The fortified values are in bold. The HP will stay constant with difficulty, and will not be affected by HP scaling post round 81.

Golden Bloons begin spawning on Round 21, and one will spawn in every group of 10 rounds before the victory screen pops up.

Each golden bloon will spawn in a 'block' or 'window' of 10 rounds (see below table). A golden bloon may only spawn once within each window, but doesn't always spawn on the same rounds of each window. Leaving the game and reentering it may delay or skip over the golden bloon, as it tries to spawn on a round before or after the round loaded from a saved game.

If the game was exited and then reloaded, the victory screen may not count all golden bloons popped, but the player will still have gained the monkey money from them.

Due to how the Golden Bloon becomes invulnerable and moves very quickly towards a random direction after taking damage, it is recommended to use slowing/stalling strategies if one wants to pop Golden Bloons and receive their Monkey Money bounties. Avoid adding near the entrance towers or heroes who attack quickly, produce erratic projectiles, or produce on-track projectiles, but do not inflict stalling/slowing effects with each attack.

The game does not need to be completed to earn rewards from popping Golden Bloons, the bonus rewards are earned instantly.

The best option for fighting Golden Bloons are towers whose main attacks feature slowdown or stuns, the most significant examples being Ice Monkeys and Glue Gunners. Ice Monkeys will freeze the Golden Bloon in place, effectively locking it down and dealing damage until it is destroyed. Having a 0-2-2 Ice Monkey is sufficient enough to take out the first Golden Bloon of a game, requiring support later on.

Since Golden Bloons from later rounds gain properties which make them more difficult to damage, Monkey Villages provide detection for surrounding towers. Most notably, Radar Scanner and the Monkey Intelligence Bureau allow powerful stalling towers to still hit and deal with Golden Bloons. Monkey Subs can also aid in the detection of camo as well by upgrading it to Submerge and Support. Such support opens up other towers to helping stall and pop the Golden Bloon, such as 4-2-0 Bomb Shooters.

Heroes which provide a stun or knockback are preferred over high damage or quick attack speeds. Heroes like Pat Fusty can slap back the Golden Bloon several times at Level 5, as well as stunning bloons with his main attack at Level 6. Further level bonuses which grant him attack speed buffs and enhanced stun allow Pat to do well against the Golden Bloon, though having the bloon dash past his small range while invincible is a problem. Psi provides much less direct damage to the Golden Bloon, even at Level 20, but their Psychic Blast ability allows for a significant stun on the bloon if it isn't invulnerable.

Given that rapid and consistent damage leads the Golden Bloon to frequently move around the track invulnerable, some tower types are advised against when trying to pop the Golden Bloon. Towers which attack quickly can lead to frequent bouncing around before stalling towers can contain the target, easily passing by high tier Super Monkeys and even being immune to Legend of the Night's black hole ability. Likewise, paragons are equally problematic against the Golden Bloon.

Global ranged towers such as the Sniper Monkey and Monkey Sub share the same issue of hitting the Golden Bloon before it is contained. This also extends to towers like Monkey Ace and Heli Pilot, where their multiple projectiles frequently hit the target and causes it to move around erratically.

Spike Factories may seem like the best counter to Golden Bloons, but the erratic movement and temporary immunity of Golden Bloons upon damage allow it to move past large piles of spikes unfazed.

Various sources of Damage over Time can function similarly to the Glue Gunner in ignoring the damage immunity of the Golden Bloon, but they will also frequently cause it to remain invulnerable as it travels down the path. The slow effect of glue allows Damage over Time strategies to work best, so having these extra sources should only be done after holding the Golden Bloon down with other stuns and slows.

Be cautious of upgrades which directly remove fortifications off a Golden Bloon, as there are related penalties to doing so. Doing so will still reduce the amount of hits required to pop it, but the rewards for beating it will be subsequently reduced to normal amounts rather than the 2x bonus. For players looking to complete Gold Bloon achievements however, prioritizing ease of popping over rewards makes this a boon that outweighs the penalty.

The following towers are important to keep in mind for their stalling abilities, but due to how they function are often less effective at stalling the Golden Bloon without help from other towers:

When the Golden Bloon arrives:

When the Golden Bloon is hit:

When the Golden Bloon is popped:

Message when encountering Golden Bloons for the first time

Winning a Co-Op game with 2 Golden Bloons popped, with their additional rewards shown 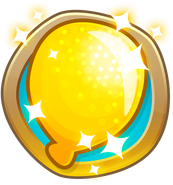 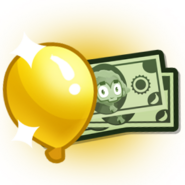