The Golden Bloon is an event and a Bloon type in Bloons TD 5 Mobile. It was added on September 16, 2016. When the event is available, a Golden Bloon is displayed on the map selection screen and clicking in leads the player to the map where the Golden Bloon is actually available. When the message is shown, it has the two yellow triangles with exclamation mark on the top screen and the text "WARNING" and middle screen says "Golden Bloon Detected!". And the bottom screen shows the icon of Red Camo Bloon, Ceramic Bloon and Lead Bloon.

While playing the map, the Golden Bloon appears once between rounds 30 and 40. It moves the opposite direction than regular Bloons on the track (i.e. it goes reverse when the track is not played as reverse and vice versa) and regardless whatever difficulty. It has the properties of a Ceramic, Camo, and Lead Bloon, moves as fast as a Pink Bloon, and has much more health. After many hits, the Bloon pops and releases a reward. The Golden Bloon's rewards are Monkey Money and an Agent, with more Monkey Money awarded on higher difficulties. After the round where the Golden Bloon appeared (no matter if it was popped or it leaked), it moves to a different map where it is available after 4 hours. If you miss the Golden Bloon and restart the map (in an attempt to get a second chance), it will not reappear. 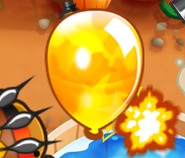 Close-up view of the golden bloon. (Note the camo patterns on it.)

Box that the Golden Bloon drops when defeated.