Bloons Wiki
Register
Don't have an account?
Sign In
Advertisement
in: Articles in construction with a WIP, Glue Gunner, Bloons TD 6,
and 6 more

Glue Strike is the fourth upgrade of Path 2 for the Glue Gunner in Bloons TD 6. It unlocks the Glue Strike Ability, which when used causes glue to rain down all over the screen, gluing all non-MOAB-class bloons on screen for a short time, and causing all affected bloons on screen to take in +2 damage, and render Leads vulnerable to any damage type. This ability sticky glue soaks up to 6 layers (all with Glue Soak). Adding Corrosive Glue allows the main attack and ability to stick to and attack MOAB-class bloons too. If crosspathed with Corrosive Glue, ability glue applies a damage-over-time that deals 3 damage per 2s. Cooldown for the ability is 30 seconds.

Glue Strike wears a yellow tight suit that covers the whole body, Glue Hose and Glue Storm also wear these yellow tight suits. Glue Strike has green eye lenses (Glue Hose and Glue Storm do as well) that come straight out of the suit. Glue Strike has 2 black gloves that have white rings around the wrist. On its back, it has a very large glue tank that is connected to the body with straps. The most noticeable part of his art is the giant glue hose that is holding it up from all of the glue that is coming out.

Glue Strike adds an ability that causes all glueable bloons on screen to receive glue that soaks up to 6 layers and causes them to be temporarily vulnerable to +2 damage and temporarily lose Lead properties. Adding Corrosive Glue allows the main attack and ability to stick to and attack MOAB-class bloons too. Its main attack is statistically equivalent to Glue Hose.

Glue Strike's main glue is considered a Level 1 glue, unless given unless given higher-tier glues, specifically with Corrosive Glue. Higher-tier upgrades can override this glue. Glue Strike's damage debuff on bloons is apparantly separate from the glue prioritization system, but such a status effect appears to not work if used with Upper Path 1 Glue Gunners or Upper Path 3 Glue Gunners. 2-4-0 Glue Strike's corrosive strike glue does self-synergize with the debuff, dealing 3 damage every 2.0s.

Glue Strike's ability targets all non-blimp bloon types across the whole screen, and because it has infinite pierce this attack has no specific targeting priority. Adding Corrosive Glue allows gluing of all bloon types.

Glue Strike's ability is rather simple in concept, gluing all regular bloons currently on screen to slow them down, but it additionally comes with the benefit of making them all temporarily more vulnerable to increased damage from all other attacks. Addition of other towers is beneficial to take advantage of the weakened bloons.

Crosspathing is beneficial with Glue Strike, and the most favorable crosspath is usually with Corrosive Glue (2-4-0). With this crosspath, it can be used to deal heavy damage-over-time to bloons and cause MOAB-class to become temporarily vulnerable as well. The alternate crosspath with Stronger Glue, although less favored, is still useful if regular bloons, specifically Super Ceramics, need to be slowed much further.

Taking inspiration from the Glue Storm buffs, Glue Strike had also gained the +2 damage vulnerability onto bloons to make the Glue Strike ability usable on early mid-game scenarios, especially when countering Regrows. It received another buff that allowed abilities of both 2-4-0 and 0-4-2 crosspaths to become more usable at two very different support roles. 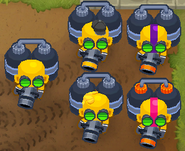 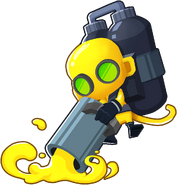 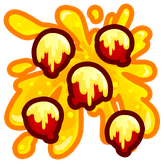