No (can be upgraded to Glue Strike)

Glue Splatter is the second upgrade of Path 2 for the Glue Gunner in Bloons TD 6. It allows the Glue Gunner's glue blobs to splat on impact. Once a glue blob collides with a bloon, it produces an area-of-effect that splatters glue onto up to 6 bloons per splatter (8 with the

A Glue Gunner with Glue Splatter receive an orange protective suit and green goggles. If given as a crosspath, the orange section with Tier 2 crosspaths are guaranteed to be on the monkey's right side, while the Tier 1 upgrades Glue Soak and Stickier Glue add their respective items. For Tier 3 and 4 upgrades, an orange stripe is added to the monkey's head.

Glue Splatter changes the projectile to splat on impact, gluing up to 6 bloons per splatter.

Glue Splatter is considered a Level 1 glue, unless given unless given higher-tier glues, specifically at least Corrosive Glue or MOAB Glue. Higher-tier upgrades can override this glue.

Glue Splatter allows the glue to affect many more bloons per shot by creating an area-of-effect. It is a very expensive option for the early game, especially compared to its tier status, but its crowd control can be very effective. The greatest value of Glue Splatter comes from adding crosspaths.

It costs cheaper than it did in BTD5, but otherwise there has not been significant changes besides fixing a few quirky interactions when interacting with Glue Splatter as it is a simple upgrade.

Glue Splatter splashing at a bloon 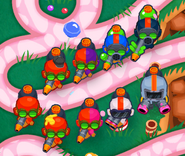 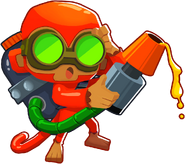 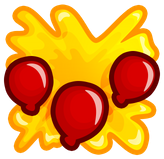