Glue Hose is the 3rd upgrade of Path 2 for the Glue Gunner. This upgrade makes the tower shoot glue more than 3x as fast and glue twice as much bloons with an update, allowing many more bloons to be glued, and, if paired with Corrosive Glue, popped. This tower, along with other glue towers, should generally be placed at the beginning of the map for the best effects. It is nearly useless late in the game in BTD5, when most bloons are M.O.A.B. Class Bloons.

This upgrade returns in BTD6 as the third upgrade of Path 2, but strictly triples attack speed with no impact on pierce. As with all Glue Gunners, it can now target MOAB-class bloons if Corrosive Glue is bought as well. However, it can also prevent other Glue Gunners from targeting MOAB-class bloons if coated with said glue, though stronger solvent glues (Bloon Dissolver, Bloon Liquefier, and The Bloon Solver) can easily override any Glue Hose glue. It costs $3250 on Medium.

The upgrade picture in BTD5 is a glue gunner in a yellow suit with gray goggles. 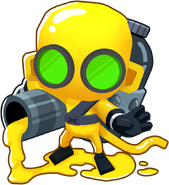 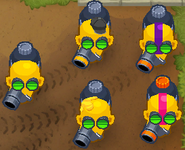 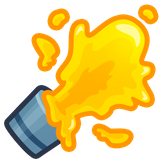 Instamonkey icon
Add a photo to this gallery