Bloons Wiki
Register
Don't have an account?
Sign In
Advertisement
in: Articles in construction, Articles with incomplete sections, Glue Gunner,
and 3 more

Glued Status: Affected bloons move at 50% speed, lasts for 11s and soaks through 3 layers of bloon.

The Glue Gunner is a Primary-class tower in Bloons TD 6 that shoots glue which slows down Bloons. The tower retains its name and role from the Bloons TD 4, and 5 game generations, with significant additions. It did not receive any teasers prior to release, but it was first shown when the game was available to select YouTubers several days before BTD6's official release date.

Initially, the Glue Gunner shoots a non-damaging glob of glue every 1.0s, sticking onto one bloon per glob. Glue can soak through up to 3 non-blimp layers (more with Glue Soak), slows the affected bloon by 50%, and the slowdown effect lasts up to 11 seconds. Various upgrades increase the potency of the glue, including a corrosive formula, splatters of glue, and slowdown of MOAB-class bloons. All glues are governed by a glue prioritization system; "stronger" glues are prioritized first and can override any weaker glues, with some exceptions.

The Glue Gunner holds a large cannister of glue on its back, and the monkey holds the nozzle and trigger with its right and left hands, respectively. He looks not too different compared to his BTD5 counterpart outside of having the general BTD6 art style. There are minor differences to the Glue Gunner's visual appearance, however.

Visually, the Glue Gunner looks very similar to its BTD5 counterparts, but with minor differences. The tube connected to the hose now has a greener colour and shadings, which makes it more realistic. The yellow glue container now has an extra mini rope which acts as a strap for the monkey to wear it like a backpack, there appear to be screwed on the metal band around the container, and the hose is spewing glue in the artwork but it shoots a blob in other games' art while the gameplay itself is still the same. Otherwise, there are little changes, if any to the tower.

The Glue Gunner has gained a significant overhaul of buffs that make it viable across a variety of different roles. As an unupgraded tower, its basic glue shots can now soak through 3 layers of bloon instead of just 1 and can be applied to MOAB Class bloons, provided MOAB Glue or Corrosive Glue is purchased. Upgrading to Glue Soak allows the soaking of all layers, just like the original version. Upgrading it to Corrosive Glue or higher can also damage MOAB-Class, enhancing its use in gameplay capabilities, but it cannot slow them down without the MOAB Glue upgrade.

Path 1 increases the power of the glue's penetration potential and deadliness. Glue Soak allows glue to soak all bloon layers, forcing the bloons to undergo the glue status forever until unglued. Corrosive Glue slowly corrodes any affected bloons every few seconds, and can now target and stick onto MOAB-class bloons with half glue duration and no slowdown. Bloon Dissolver is formulated into a much more powerful solvent, increasing its corrosion rate for stronger cleanup against regular bloons. Bloon Liquefier once again improves the solvents in the glue by increasing the corrosion rate of the glue and affecting additional bloons too. Lastly, The Bloon Solver provides the ultimate toxic mixture of sticky green glue, spraying out splashes of the most corrosive solvents at super fast speeds.

Path 2 deals with increasing the distribution of glue. Most of these upgrades along this path involve increasing the rate of applying glue by means of extra pierce to each shot. Bigger Globs allows each shot of glue to hit one more bloon per shot. Glue Splatter converts the glue into a splash of glue, for an even greater amount of pierce. Glue Hose increases the attack speed of the Glue Gunner to distribute the glue even faster. Glue Strike adds an ability that drops a quick rain of glue over the whole screen, making all affected bloons vulnerable to extra damage while glued. Glue Storm further improves of its ability by creating a persistent storm of icky sticky glue.

Path 3 specializes in improving the stickiness of the glue. Stickier Glue is now on a separate upgrade path, and begins this path by improving the lifespan of the glue. Stronger Glue improves the slowdown of the glue from 50% to 75%, for even slower bloons. MOAB Glue modifies the glue into a bubblegum-like substance that can stick to and slow MOAB-class bloons, although with a weaker slowdown effect and duration. Relentless Glue increases potency of the glue by allowing bloons directly glued by the Glue Gunner to drop blobs of glue onto the track for other bloons to pick up. The strongest, most unstoppable glue comes from the Super Glue, greatly reducing the speed of all affected bloons to an extremely slow speed.

One significant note is the Glue Gunner's major weakness to BADs, due to not applying any slowdown effect onto them regardless of upgrades. Besides this, the Glue Gunner is a highly versatile support-oriented tower across a wide variety of different aspects.

The Glue Gunner is classed as a Primary Monkey.

The base Glue Gunner uses the standard target priorities: First, Last, Close, Strong. Many of the Glue Gunner's alternate attacks have target priorities that are integrated into the Glue's own target priorities. Glue Gunners will not attack bloons glued by their own glue attacks and will instead prioritize gluing new ones, except in the Super Glue's case, where it will attack any bloon that isn't immobilized rather than glued.

Alternate attacks have a different set of target priorities:

In Bloons TD 6, there is a glue prioritization system. This system tells the Glue Gunner if it should ignore a bloon with a different glue or apply its own glue on it. Bloons can have multiple glue types, but some effects are dictated by the last applied glue, so the prioritization system is made in an attempt to let bloons become applied with a more valuable glue, which should reduce the possibility for potentially disadvantageous glue synergies.

Before around Version 25.0, the glue prioritization system worked like this: 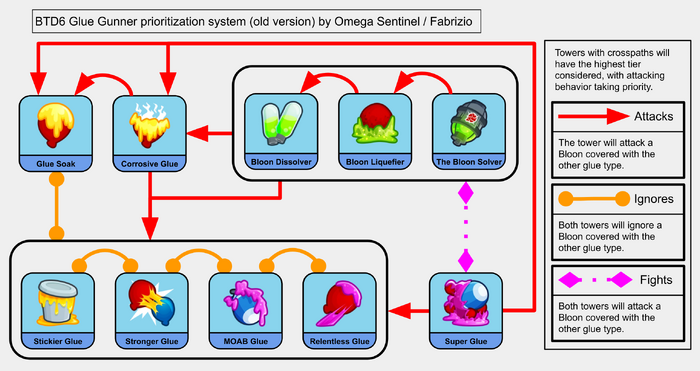 After the release of Version 25.0, which appeared to have reworked the glue prioritization system, the system works more like this: 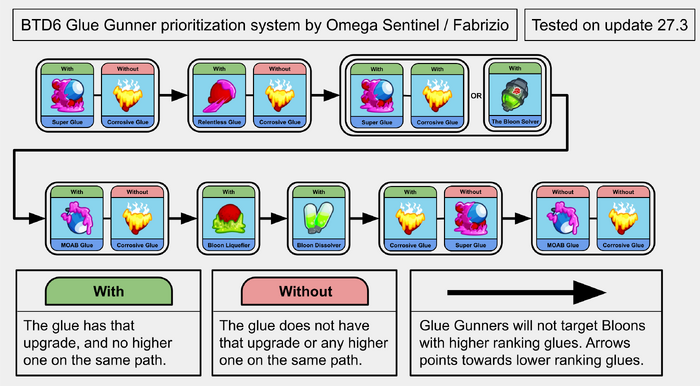 Bloon speed depends on the last applied glue until it expires (x-4-x Glue Strike and x-5-x Glue Storm abilities will not affect the speed of already glued bloons), damage effects can stack as long as they are of different path 1 tiers (2-x-x Corrosive Glue , 3-x-x Bloon Dissolver and 4-x-x Bloon Liquefier), however, both x-x-5 Super Glue and 5-x-x The Bloon Solver will remove any current glue on the target (this won't take away the x-x-4 Relentless Glue, Glue Strike and Glue Storm effects).

This section displays Monkey Knowledge that has effects on Glue Gunner and its changes when compared to one by default:

Listed are comparisons of the Glue Gunner in BTD6 compared to BTD5. Takes into account Flash and Mobile versions.

Note: Lists all balance changes implemented for the Glue Gunner when it was first released in Bloons TD 6 (June 14th 2018) in comparison to Bloons TD 5. Takes into account Flash and Mobile versions of Bloons TD 5. 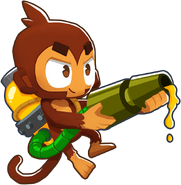