For Kylie Boomerang, boomerangs gain +8 pierce, for 27 pierce per boomerang instead of 22. When given to MOAB Press, the pierce of each anti-MOAB boomerang increases from 300 to 420 and deal +50% knockback against blimps, and increase MOAB Domination's explosion pierce and radius.

The monkey's suit turns red and it gains a blue X on its head. The boomerangs are replaced with glaives, which appear to be a 5-pointed throwable object that function similarly to boomerangs.

Increases pierce of boomerangs by +5, for a total of +9 compared to no Path 1 crosspaths. For most boomerangs, this increases pierce of each boomerang from 8 to 13, while pierce of Kylie Boomerang's kylies each increase from 22 to 27. For MOAB Press's special kylies, they gain +120 pierce, from 300 to 420, for a total of +220 pierce compared to no Path 1 crosspaths. MOAB Domination's explosions have increased explosion radius (50 to 75) and pierce increases by +10, though it is bugged to reduce pierce from 40 to 30 (likely an oversight when MOAB Domination's explosion had a base pierce buff).

Like all Boomerang Monkeys, Glaives can access Change Hands secondary targeting priority to switch hands, changing the origin and direction of the boomerangs.

The following is a list of statistics of a Boomerang Monkey with Glaives. It includes its base statistics and all associated crosspathing interactions. Expand the box on the right to see further information.

Glaives possesses a great amount of pierce in the early-game for an upgrade not reliant on area-of-effect attacks, such as is the case for the Bomb Shooter. It is an effective counter to early-game grouped bloons, especially along a suitable bend. When it comes to crosspathing, this is generally the superior crosspath for Bionic Boomerang and its higher upgrades because of the Glaives upgrade's extraordinary pierce, while for MOAB Press it is useful when countering hyperdense blimps because of granting a significant amount of pierce to the special knockback boomerangs.

Glaives was nerfed to lose its bonus attack speed, but remains unchanged for the most part due to the base Boomerang attack speed buff. 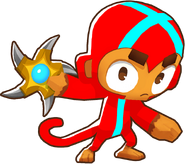 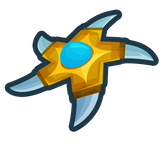