50 (can jump to a nearby target after hitting)

Glaive Ricochet is the third upgrade of path 1 for the Boomerang Monkey in BTD6. It allows the Boomerang Monkey to throw glaives that bounce from bloon to bloon as long as there are other bloons close by. It will not hit the same bloon more than once even if the glaive bounces in its direction. Each glaive now pops 50 bloons (80 with the "Extra Bounce" Monkey Knowledge), and can bounce towards any bloon up to 62.5 units distance. Glaive Ricochet can be unlocked for 2500 XP.

The monkey's jumpsuit turns purple and gets a blue X on his back, just like the X on the Glaives upgrade.

The following is a list of statistics of a Boomerang Monkey with Glaive Ricochet. It includes its base statistics and all associated crosspathing interactions. Expand the box on the right to see further information.

Minor changes for the upgrade alone. However, 3-0-2 crosspath is a more viable option thanks to the Red Hot Rangs damage buff. 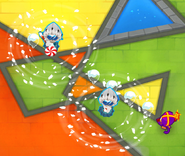 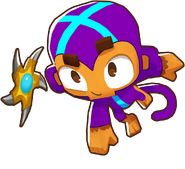 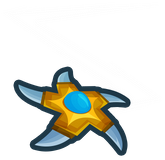