Glaive Ricochet is the 3rd upgrade of path 1 for the Boomerang Thrower in Bloons Tower Defense 5. It allows the Boomerang Thrower to throw a glaive that bounces from bloon to bloon as long as there is one close by. This means that the glaive will continue and pop up to 100 (101 if the first bloon popped is a Red Bloon; 40 in Bloons Monkey City) bloons along the path similarly to a homing Spike-O-Pult, albeit with much more popping power. However, this does not mean that the glaive will continuously ricochet between two bloons as the glaive will not attack bloons it has already popped.

The tower turns purple and gets a blue X on his back, just like the X on the Glaive Thrower. This upgrade is good to use when there are large clumps of weak bloons close together.

Glaive Ricochet can spawn multiple glaives when under the influence of a Monkey Village with the Monkey Fort upgrade.

Glaive Ricochet no longer spawns multiple glaives when under the influence of a Monkey Village with the Monkey Fort upgrade; only one Glaive is thrown at a time per tower.

A Boomerang Thrower with the Glave Ricochet 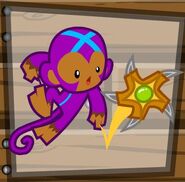 BTD5 icon in the game 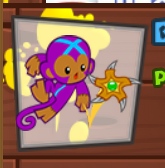 Glaive Ricochet BTD5S Icon
Add a photo to this gallery

Retrieved from "https://bloons.fandom.com/wiki/Glaive_Ricochet_(BTD5)?oldid=270723"
Community content is available under CC-BY-SA unless otherwise noted.