The Glaive Lord acquires two permanent glaives that rotate around the tower, shredding bloons that come into contact with the glaives. Glaive Ricochet is still used along with the rotating secondary glaives and can pop even more bloons. This upgrade also gives the tower Camo detection in BTD5. The glaives only rotate around the Boomerang Thrower during a round.

The Glaive Lord returns as an upgrade in BTD6, this time as Path 1's 5th-tier upgrade. It can be unlocked for 37,500 XP. As the Glaive Lord's original color scheme has been used for the M.O.A.R. Glaives upgrade in this game, the Glaive Lord now dons a dark purple robe. Also, the Glaive Lord now uses three orbital glaives instead of two. Glaive Ricochet and M.O.A.R. Glaives are still in effect upon purchasing this upgrade, and the orbital glaives will hit any Camo Bloons, Lead Bloons, and D.D.Ts nearby. However, the tower still doesn’t grant camo detection. The Glaives surrounding the tower have infinite pierce and deal 2 damage (7 to ceramics and MOAB class bloons) every 0.1 seconds to nearby bloons, making them much more powerful than the Glaive Lord's basic attack. They do not benefit from crosspathing. The Glaive Lord's thrown glaives apply fragments onto the first bloon that they hit, dealing 150 damage to it over 15 seconds. This effect can be stacked infinitely.

Unlike BTD5, the direction that the glaives spin does not matter anymore, as the rotating glaives act more as a continuous fixed area-of-effect radius. If placed in the correct spot, like a loop in the map In the Loop, it can completely destroy any non-MOAB Class Bloon currently in the game excluding Super Ceramics.

Orbital Glaives' damage increased from 2 to 7 against ceramics and MOAB class bloons.

A 4/2 Glaive Lord fending off bloons in Bloons Tower Defense 5. 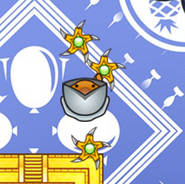 Glaive Lord on a legendary card.

A Glaive Lord in BTD6 SHREDDING a bunch of MOABs. 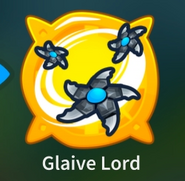 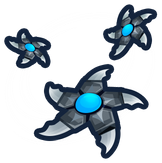 Shred effect on a BAD

Instamonkey icon for Glaive Lord
Add a photo to this gallery
Retrieved from "https://bloons.fandom.com/wiki/Glaive_Lord?oldid=257524"
Community content is available under CC-BY-SA unless otherwise noted.