This article is about the type of bloon appearing in Bloons Adventure Time TD. For the Sandbox-exclusive bloon from Bloons TD 6 nicknamed the "Ghost Bloon" by many fans, see Test Bloon.

Ghost Bloons are a new bloon property introduced in the 1.2 update of Bloons Adventure Time TD, much like the Camo, Regrow, Fortified, Shield, and Zombie bloon properties. Ghost Bloons distinguish themselves from normal Bloons by wearing ghostly drapes that feature sinister smiling faces, whereas MOAB-class bloons will show a full ghostly appearance over their bodies to indicate their Ghost property, as well as having a different colored outline when behind an obstructing object.

They make their appearance in the Hall-Ooo-Ween event and in the Frozen Blades Adventure in Ice Kingdom. They are immune to physical attacks, making weapons like darts, bombs, and swords useless against them; Only energy, bubblegum, fire, and ice attacks, or any character with trickets like Robo-Monkey Visor or Glob's Helmet can pop Ghost Bloons. Like any property, Ghost Bloons can also be combined with other Bloon properties as well. The Ghost property can also apply to MOAB Class bloons, with the exception of DDTs and BADs; Ghost MOAB-Class Bloons have a glowing white aura (with glowing eyes for BFBs and ZOMGs) to indicate they have the Ghost property, and they slowly turn to skeletons as they take damage. Currently, Ghost MOAB-class are only available in limited time events containing Ghost Bloons, such as the 2018 Hall-Ooo-Ween event or the 2018 Holly Jolly Secrets event. They are also seen in Lumpy Space.

Two MOABs, one with the Ghost property and one without - the paler one is the Ghost MOAB 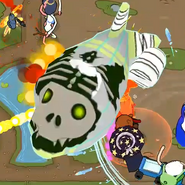 An example of the Ghost bloon changing the outline of MOAB-class bloons from a dark silhouette to a bright cyan.