Full Metal Jacket is the 1st upgrade of Path 1 for the Sniper Monkey in Bloons Tower Defense 5. This upgrade allows the Sniper Monkey to pop 4 layers of the bloon that it hits as well as lead bloons. This tower is extremely useful for clearing out small groups of bloons but is not as good when trying to attack compact groups of bloons. It is inadvisable to use this along with towers with low popping power as the bloons popped will spawn a dense pack of weaker bloons, like yellows. 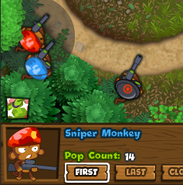 BMC icon with the tower selected

Retrieved from "https://bloons.fandom.com/wiki/Full_Metal_Jacket_(BTD5)?oldid=272913"
Community content is available under CC-BY-SA unless otherwise noted.