Full Auto Rifle is the fourth upgrade of Path 3 for the Sniper Monkey in Bloons TD 6. It allows the Sniper to shoot 2x as fast as the Semi-Automatic, which is ~12.25x faster than a base Sniper. In addition, bullets deal +1 damage to MOAB-class bloons.

Full Auto Rifle is a monkey bearing the aforementioned automatic rifle, which is a long grey rifle bearing a scope with an orange light, having a black, ridged handgrip just in front of the scope, and an orange stripe just behind a suppressor mounted on the barrel. The rifle also has a grey stock. The monkey itself wears a black vest with a hole for its tail, black gloves, a dark grey camo helmet with a camera attached, and orange goggles over its eyes. These orange goggles have a unique double-peak design that splits above where its mouth would presumably be.

Notably, it does not wear any shoes.

The main highlight of the Full Auto Rifle is not so much about being an efficient overall DPS tower, but it is more so that it never misses its target provided that the Sniper has a clear Line of Sight. As such, it is an excellent choice for anti-stalling earlier rounds, particularly with the 0-2-4 upgrade with Berserker Brew or Stronger Stimulant, or the 2-0-4 upgrade paired with a decent camo-detecting tower. For most occasions, setting the Full Auto Rifle on Strong is a good choice, although the First target priority is generally more useful for 0-2-4.

The 2-0-4 Full Auto Rifle is somewhat decent against MOABs in the mid-game, but it tends to struggle against the hyperclumped Yellows that it leaves behind in the absence of MOABs. The presence of hyperclumped Yellows can be rectified by utilizing the 0-2-4 Full Auto Rifle paired with Berserker Brew or Stronger Stimulant, which although allows it to pop grouped bloons better, it will lose good single-target DPS over increased grouped popping power.

Very slightly affected by the Version 20.0 Path 3 crosspathing rework, but later buffed in MOAB-class damage to add late-game relevance and enforce Full Auto Rifle as a DPS Sniper. Also a reduced cost in compensation for a damage type rework for purposes of nerfing 0-2-5 Elite Defender. 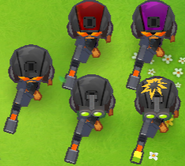 Sniper now with blocked line of sight due to the upgrade 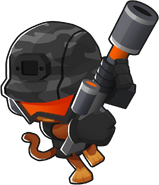 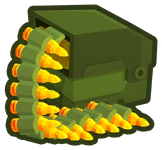