Frag Bombs is the second upgrade of Path 3 for the Bomb Shooter in Bloons TD 6. It allows all bomb explosions to pop Black Bloons and create fragments that are spread out from the center of the explosion. Upon explosion, the bomb will emit 8 sharp frags that each deal 1 damage with 1 pierce. In addition, the Bomb Shooter gains +2 range, for roughly 4.1% more range.

The overall popping power of the fragments improves by adding Really Big Bombs, Bloon Impact, or Bloon Crush, improving the pierce, damage, and projectile count of fragmented bombs from all Upper Path 1 upgrades. Note that a fragment cannot damage the same bloon that the parent bomb collided with, regardless of conditions. Another note is that fragments cannot receive external damage buffs, but can receive any other buff (e.g. Acidic Mixture Dip's lead-popping, Sharpening Stone's pierce buff).

This upgrade replaces its wooden wheels with metal wheels. The barrel is elongated and distinct from the reinforce. The red circular pattern on top is replaced with a red explosion pattern.

Frag Bombs causes 8 frags to be produced on impact, each dealing 1 damage with 1 pierce in an Orbital Spray. These frags see their damage, pierce, and total number improve with top crosspathing. Additionally, all explosions produced pop Black Bloons.

Frag Bombs adds black-popping power in addition to a spray of fragments. Its main power is the black-popping power, which reduces dependency on other towers and Striker Jones buffs. Frags can also be added with buffs to make them stronger and deal a bit of chip damage. 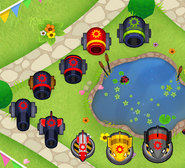 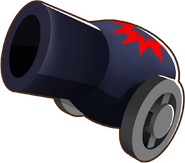 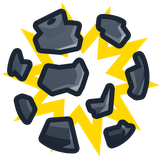