Flying Fortress is the final upgrade of Path 3 for the Monkey Ace in Bloons TD 6. It shoots 3 streams of darts and bombs, each of which fire +50% faster (from every 0.06s to 0.04s). The 3 streams of darts and bombs target the first, last, and closest bloons, respectively. Darts now deal 4 base damage instead of 2, and bombs now deal 5 base damage instead of 3, in addition to +2 Ceramic damage for both attacks. The Flying Fortress darts and bombs can pop any bloon type, including DDTs, although it needs camo detection (e.g. the Spy Plane upgrade) to detect Camo Bloons.

The Flying Fortress is one of the largest flying towers in the game. It is a dark-gray twin-boom six-engine turboprop monoplane with two parallel vertical stabilizers at the end. It has three red turboprops and three respective white propellers on each wing, alongside a blue-and-red target symbol near the end of each wing (in-game model and Instamonkey icon only). The plane also has two rows of five windows at the front.

The upgrade icon for the Flying Fortress depicts a Flying Fortress plane flying directly forwards shooting a barrage of bombs and darts at the ground. Like Spectre, in its upgrade artwork the bombs are green with yellow stripes as opposed to the in-game Flying Fortress's dark grey with red on their nose.

Like all Monkey Aces, Flying Fortress uses flight patterns as its targeting priority settings. It can also access Centered Path targeting option due to being an upgrade from the respective upgrade that grants it.

Flying Fortress's three alternating dart-and-bomb attacks are locked to First, Last, and Close, and the darts can home weakly at bloons.

At a very expensive price, Flying Fortress demolishes various types of bloon across any range in just a short amount of time, but its projectiles often miss fast bloons such as visible DDTs. Slowdown support such as Bloon Sabotage and/or MOAB Glue can help give the Flying Fortress an easier time handling DDTs. Extra support via Radar Scanner is highly recommended on top of Jungle Drums to improve its performance even further, especially with the 2-0-5 Flying Fortress crosspath.

Getting a buff from the Alchemist normally is not a good idea, as the buff wears off faster based on how fast the tower is attacking, but for this exact reason, Permanent Brew is an excellent choice for a good late-game tower combo. This is due to the fact that the alchemist buffs popping power per projectile and the flying fortress shoots a lot of projectiles very fast, every single one being affected by the buff. In fact, a super-buffed Flying Fortress outputs a huge DPS bonus outside of Sun Temples, True Sun God, and Paragons.

While Flying Fortress is impractical on CHIMPS, it still has its uses on CHIMPS. However, in the saveup for it, it needs to be affordable by the start of Round 95, given that the aforementioned round is nearly impossible with only a small amount of cash while also surviving subsequent and earlier late-game rounds. Most basic defenses with a very high potential for CHIMPS budgeting help afford Flying Fortress on time, particularly in combination with Sauda and MOAB Glue.

Flying Fortress has been buffed significantly since it was first released. It formerly was much weaker than multiple Spectres while still constantly missing bloons, but has gained a series of attack speed buffs, damage buffs, and price buffs, alongside a general Spectre homing dart addition.

Flying Fortress at 45* to the front

Flying Fortress in the Instamonkey collection

2-0-5 Flying Fortress with all 5 Spectre crosspaths, including the 0-0-4 Spectre 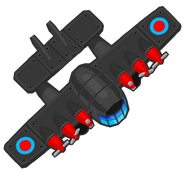 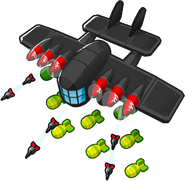 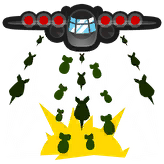