Flash Bomb is a Ninja Monkey upgrade that gives the monkey an additional explosive attack that stuns bloons, returning as the third upgrade of Path 3 in BTD6. Flash bombs damage bloons, including those with Black Bloon properties, and stun all affected bloons for 1.0s. Each Flash bomb deals 1 damage and has 60 pierce. One flash bomb is thrown with every fourth shuriken, which occurs every 2.8s (every 1.68s with Ninja Discipline).

In a similar way to the BTD5 counterpart, the BTD6 Flash Bomb has considerably high pierce but at the cost of only dealing 1 damage at a slow rate, while itself having a high pricetag. Compared to other grouped stun options, specifically Shell Shock and Bloon Impact, Flash Bomb is cheaper than Bloon Impact but more reliable than Shell Shock, as well as affects camo by default, but the Flash Bomb attack is slower than either of the two upgrades.

In most cases, Flash Bomb is limited for niche purposes on strategies heavily involving Ninja Monkeys, especially for Ninja-only strategies or when paired with armies of Shinobi Tactics. 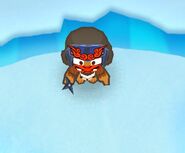 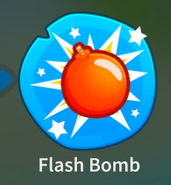 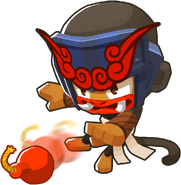 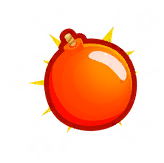