Flash Bomb is a Ninja Monkey upgrade released in BTD5 that gives the monkey an additional explosive attack that stuns bloons. Each Flash Bomb can stun and pop up to 60 bloons, including black and zebra bloons. One flash bomb is thrown for approximately every three shurikens.

The Flash Bomb upgrade turns the Ninja Monkey dark grey and gives it a red bandana. 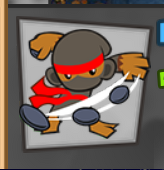 Retrieved from "https://bloons.fandom.com/wiki/Flash_Bomb_(BTD5)?oldid=267200"
Community content is available under CC-BY-SA unless otherwise noted.