Bloons Wiki
Register
Don't have an account?
Sign In
Advertisement
in: Articles in construction with a WIP, Monkey Sub, Bloons TD 6,
and 7 more

Restricted (darts and ballistic missiles, upgradable to 2/4/0 and requires another camo detection tower around the map)
Yes (first strike missile)

First Strike Capability is the 4th upgrade for Path 2 for the Monkey Sub in Bloons TD 6. This upgrade grants an ability that deals up to 10,000 damage to the strongest bloon on screen, capable of fully annihilating any bloon up to ZOMGs or DDTs, or even BADs if in critical condition, along with a large explosion of blast radius 75 that deals 350 damage onto up to 80 bloons caught inside the blast radius. The First Strike Capability ability has a 60 second cooldown.

In the upgrade portrait, the monkey folds his arms and stares at the player's direction. His eyebrows are scrunched downwards, possibly implying anger or righteousness.

First Strike Capability targets bloons using the standard target priorities. It has multiple types of attacks that are shot in different styles.

Darts are shot in a straight movement and automatically home at bloons with moderate seeking, having a tight seeking curve while traveling but does not make sharp turns. Ballistic missiles are shot in a lobbing style, launching in the air and crashing onto a target according to target priority prior to launching. First Strike ability missiles target in the same way as ballistic missiles, except are locked on Strong and can attack anywhere on screen.

First Strike Capability's main role in the game is to destroy large-health targets with its activated ability, which sends out a powerful missile onto the strongest bloon on screen. In practice, First Strike is primarily used to annihilate, or at least cripple, the Round 100 BAD. Timing of the ability is highly important, as a single use of the ability is capable of fully annihilating a BAD along with its insides if the BAD is at very low health when struck by the missile. Although primarily used against BADs, First Strike is also useful at fully annihilating spaced ZOMGs, even on CHIMPS Mode.

Traditionally for handling bigger blimps, the First Strike is a popular option in BTD6 for this role. The ability gained a sizable cost decrease and can now penetrate blimp layers when the target's health is low enough, although it has gained a damage nerf added later on due to its single-target dominance in CHIMPS strategies. It remains a popular option for taking down big blimps especially BADs on Round 100. 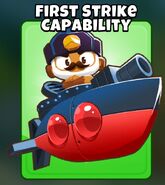 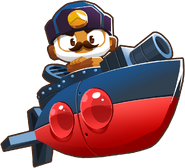