Fireball is the first upgrade of Path 2 for the Wizard Monkey in Bloons TD 6, making a reappearance in this game. It gives the Wizard Monkey with a fireball attack, shot every 2.2s. Upon collision with a bloon, the fireball will create a small explosion, popping up to 18 bloons caught in it. The fireball explosion cannot pop Black or Zebra Bloons, though the explosion can pop any other type. However, fireball explosions cannot happen if the fireballs come in contact with Purple Bloons, as Purple Bloons will simply absorb whole fireballs unharmed.

The Wizard Monkey's wizard cap gains an orange-red hatband. On the official upgrade portrait, the Wizard holds up a flame with his right hand.

The following is a list of statistics of a Wizard Monkey with Fireball. It includes its base statistics and all associated crosspathing interactions. Expand the boxes on the right to see further information.

The following are a list of wiki-written damage types associated by a Wizard Monkey with Fireball. These damage type statistics include how it attacks and how these attacks would affect bloons. Expand the box on the right to see further information.

Fireball allows the Wizard Monkey to gain a cheap way to pop Lead, as well as slightly increases the Wizard Monkey's potential for grouped popping power. It is not very reliable, but it is helpful as cheap popping power versus Camo Leads when paired with Monkey Sense. Fireball can also be used to solo Purple rounds, hence letting Wizards pop Purples for cheap, but requires extremely precise timing.

Small quality-of-life changes to the Fireball when interacting with crosspathing. Fireball attack now also gains improved damage and blast radius when upgraded to Dragon's Breath and beyond. Fireball's attack speed is also increased due to underperforming at its lead-popping and grouped-popping role.

Fireball in the BTD6 upgrades menu 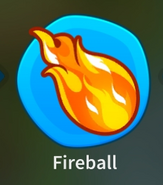 Deploying a fireball in BTD6 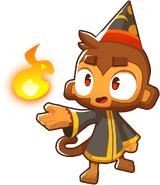 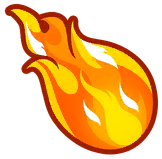