Fighter Plane is the third upgrade in Path 1 for the Monkey Ace in BTD6. In addition to increasing its flight speed, it shoots 2 powerful seeking missiles at MOAB-class Bloons, inflicting 18 damage each to up to 4 blimps each (6 with Exploding Pineapple) and come with a blast radius of 30 (34.5 with Exploding Pineapple). These anti-MOAB missiles attack every 4.0s and only trigger if MOAB-class bloons are on screen, and are locked to Strong.

Fighter Plane is a good option for handling early MOAB-class bloons by regularly shooting anti-MOAB missiles. They are not as efficient as MOAB Maulers, but they have the advantage of infinite range that MOAB Maulers lack while still not requiring ability use.

Fighter Plane has overall been nerfed since it was first released, mainly to counteract its efficiency versus single-target MOABs versus MOAB Mauler before it was nerfed.

Fighter Plane but without the missiles 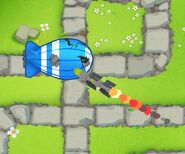 The Anti-MOAB Missiles about to hit a MOAB 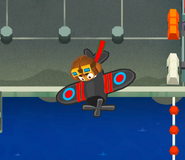 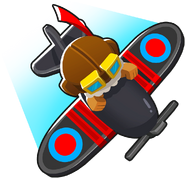 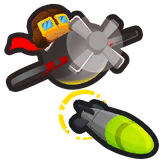