Favored Trades is the fourth upgrade of Path 3 for the Monkey Buccaneer in BTD6. It allows the tower to reward $500 per round instead of $200, as well as granting all towers in its radius with a 10% greater sell potency, capped at 95% (reachable with 3 Favored Trades, and 2 with Better Sell Deals MK). Additionally, all of its attacks are twice as fast, including grapes when crosspathed with Path 2.

Favored Trades can be seen as a souped up, superior income producer to the Merchantman, providing a hefty $500 at the end of each round, a +$300 gain from the bonus granted by a Merchantman. This can be a powerful tool, cementing the Path 3 Buccaneers as a potentially powerful revenue source alongside the typical Banana Farm, as well as benefiting from situations where a Banana Farm cannot be placed in high quantities, where water is abundant, and when the player needs decent fire power to fend off the bloons. With a maxed out Trade Empire, a Central Market, and the Monkey Knowledge Trade Agreements, you can gain $1,012 per Favored Trades. This would total $22,362 across all components, or $26,362 if Monkey Wall Street is used instead of the Central Market.

The more interesting aspect of Favored Trades is that the sell amount for a tower within the range of Favored Trades is increased by 10% of the original tower's monetary price. This can provide a helpful tool outside of C.H.I.M.P.S. Mode or Custom Challenges that ban selling, when considering selling several towers for a superior defense overall can be more easily achieved when more money is refunded.

This can also help assist the practice of selling off Banana Farms whenever the player requires a large portion of money now, providing a greater return as well as making the likelyhood that all the money expended into the Farm is reimbursed by the produce of the Farm as well as the price refunded by an extra 10%. It should be noted that this effect also applies to the Favored Trades itself, as well as only stacking up to three times per tower (2 with Better Sell Deals Monkey Knowledge), increasing selling profit to 95%.

While the potential of buying more Merchantmen can be more beneficial than purchasing a Favored Trades, it's secondary perk allows low water maps (specifically those with water near the center) to provide a good bonus for the bulk of the player's defense. Maps like Logs and #Ouch examplify this potential, with a Favored Trades in the center of the map, it can spread its effect to many effective positions for land-based defensive towers.

To purchase one Favored Trades at the lowest price will require getting a 0/0/4 Buccaneer. A 0/0/4 Buccaneer will cost the base Buccaneer tower, Long Range, Crow's Nest, Merchantmen, and the Favored Trades upgrade itself, which will provide the cheapest and most direct route for profit. However, this may change under many circumstances, specifically depending on game mode and whether Trade Empire is active or if the player own a Central Market.

The table below indicates the game mode pricing, as well as the presence of Trade Agreements to indicate two points of Interest, the first where the upgrade effectively paid off from its own cost and the second where it paid off for the entire cost of the tower and subsequent upgrades of a 0/0/4 Buccaneer. The numerical value represents the rounds required to be completed after purchased to reach their goals. These do not consider other Monkey Knowledge such as Advanced Logistics or Military Conscription, as well as assume there is no Trade Empire or Central Market bonuses active and increasing profit in that regard.

All Favored Trades crosspaths (Path 1 at top, Path 2 at bottom) 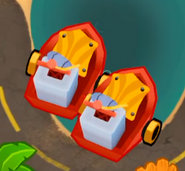 Two Favored Trades on an angle

Version 16.0 description change
Add a photo to this gallery

Retrieved from "https://bloons.fandom.com/wiki/Favored_Trades?oldid=246414"
Community content is available under CC-BY-SA unless otherwise noted.