Faster Throwing is the 1st upgrade in Path 2 for the Boomerang Monkey in BTD6. It increases attack speed by 33.33%.

A group of boomerang throwers with the 3-1-0 upgrades (Glave Ricochet and Faster Throwing) can be used for crowd control and easly dominate most non-M.O.A.B. class bloons with the help of a 0-2-0 monkey village. 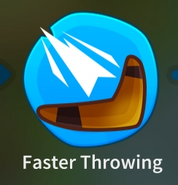 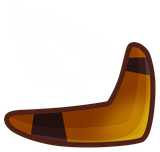 Instamonkey icon for Faster Throwing
Add a photo to this gallery

Retrieved from "https://bloons.fandom.com/wiki/Faster_Throwing_(Boomerang_Monkey)?oldid=274639"
Community content is available under CC-BY-SA unless otherwise noted.