For a simple upgrade, Faster Throwing is a powerful upgrade for the Alchemist. Instead of just being an offensive boost akin to most of the other tier 1 and 2 upgrades, this upgrade allows for the increased throwing of acid and potions, allowing for more powerful upgrades to be pumped out faster. Hence, Acidic Mixture Dip, Berserker Brew and Stronger Stimulant can be applied to more towers and allows them to be more consistently empowered at a time, allowing for the Alchemist to increase in performance quite dramatically when following Path 1.

In combination with Path 2, it can also stand its ground against a larger splash by being able to become further upgraded to Acid Pool, now themselves applying Unstable Concoction to MOABs. On top of a greater fire rate, it very much rivals a greater area of effect in practice.

In Version 21.0, Acid Pools and Faster Throwing swapped upgrade order, which arguably is a buff to this upgrade, as it costs a lot less to obtain aforementioned upgrade due to not needing to buy Acid Pool. 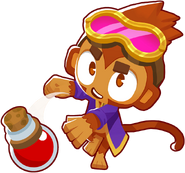 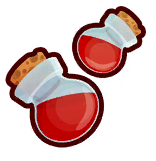 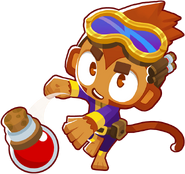