Faster Reload is the first upgrade of Path 2 for the Bomb Shooter in Bloons TD 6. It allows Bomb Shooter to shoot 33% faster (from every 1.5s to every 1.125s).

This upgrade adds three red fins to the top of the body of the cannon.

This is a basic attack speed bonus for the Bomb Shooter, which helps it apply explosions at a faster rate, although Bigger Bombs may be the better option for countering large groups of slower bloons. 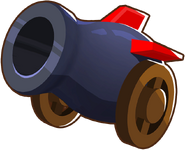 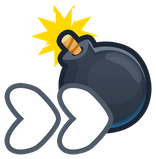