Faster Rangs is the second upgrade in Path 2 for the Boomerang Monkey in Bloons TD 6. It increases projectile speed by 20% as well as attack speed by an additional 33.33%~ (25% reduction in reload time) compared to the previous upgrade, allowing the Boomerang to attack every 0.675 seconds. This equates to ~77.7% increased attack speed or ~43.7% reload time reduction from the base tower.

This upgrade changes the Boomerang's jumpsuit color from yellow to grey. Additionally, it gains another parallel red stripe on its head.

Like all Boomerang Monkeys, Faster Rangs can access Change Hands secondary targeting priority to switch hands, changing the origin and direction of the boomerangs.

The following is a list of statistics of a Boomerang Monkey with Faster Throwing. It includes its base statistics and all associated crosspathing interactions. Expand the box on the right to see further information.

The following are a list of wiki-written damage types associated by a Boomerang Monkey with Faster Throwing. These damage type statistics include how it attacks and how these attacks would affect bloons. Expand the box on the right to see further information.

The faster projectile speed is helpful for catching faster bloons better, while the further increased attack speed increases consistency of each shot. 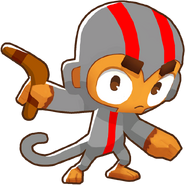 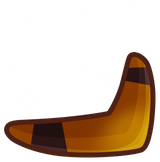