Faster Production defaults on Normal targeting priority, which dispenses the spikes onto nearby bloon track in a semi-sporadical behavior. If given Smart Spikes, it will also receive Close, Far, and Smart.

Crosspathing with Path 2 has been softened, leading to Faster Production getting indirectly nerfed in the process.

Faster Production in BTD6 with its respective 0-1-0 tower. 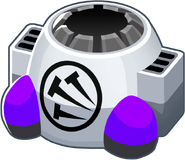 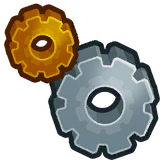