Faster Engineering is the Tier 2 upgrade of Path 1 for the Engineer Monkey in Bloons TD 6. It increases the production speed of sentries from every 10.0s to every 6.0s. This allows up to 4-5 Sentries to be placed on the map at once per Engineer (5-6 Sentries with the "Vigilant Sentries" Monkey Knowledge upgrade), ignoring attack speed bonuses. This upgrade also increases the rate of producing Cleansing Foam and reduces cooldowns for new Bloon Traps. For these contraptions, their attack speed is increased by +66%, equivalent to an attack cooldown reduction of 40%.

Engineers with Faster Engineering sport a downward-pointing green chevron on their helmet, and the combination wrench they wield now has a red handle.

This remains true for all upgrades using it as a crosspath. 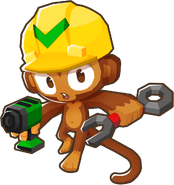 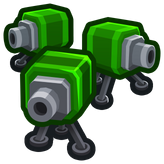